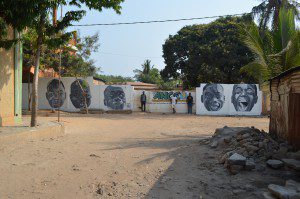 I went to Lomè, Togo at the end of 2013, to work with Ange ONG, a local Not for Profit Organization who provides shelter, free education, food, health care and support to more than 600 street kids.

600 faces project aimed to tap on the collective imagination, increase children sense of belonging to Ange two centers and increase Ange visibility both locally and internationally. Our long-term goal was to help Ange collecting more funds and resources in order to keep on working and offering the kids a better chance to live in Togo.

I created a big mural outside the main building of the NGO in the capital of Togo, Lomé and I conducted several interviews. Last but not least, I moved the material and I exhibited in Europe to raise money for the organization.

In collaboration with Ange staff, the kids and Togolese volunteers, I aspired to create a stronger image of the organization capable of raising awareness about both Ange and the children. The goal was to paint the external walls of Ange center in Lomè with faces and expressions of kids who are living there to increase the sense of family and group between the kids. Alongside, I conducted interviews and collected images and sounds to make a documentary that showcase Ange’s amazing work but more importantly that investigated the lives of these kids.

Created in 2001 by Youth Advisor Gabriel Kossi Amouzou, ONG Ange’s services and work covers more than 80% of the Togolese territory. At that moment, Ange managed two youth centers, conducted activities and discussion groups in the beach area of Lomè, provided support to children in a youth detention center and provided support and help to guest families. Without their work, 600 children would have been left out in the city mostly by them self.

During the project on-site, I received threats to death and some of the faces I created were ruined with red painting during the night because a part of the mural was facing the entrance of a Mosque because according to Muslim religion, believers cannot pray in a place surrounded by images.


This misunderstanding was a great chance for me and the local Muslim community and their imam to prove religion is not an obstacle and Muslim are not equal to terrorists.
Together we found a solution (we moved the project from its original planned position) and the imam and his advicers gave proof of great humanity and great sense of honor.
I want to thank them as much as Ange director and his translator and lawyer of the NGO, Baudane Thot, alias Bobo who was essential during all my stay.


Since I was back to Europe, I prepared a traveling exhibition around Europe  made of pictures and short audio interviews to sensitize the international public opinion about the work of this NGO, in order to collect possible new collaborations, funds to help them keeping working and to improve the life style of the children.

Nevertheless, Ange had already important partners around the world such as Fondacion, Caritas and National Good Wills. For more information about Ange’s activities visit http://angetogo.solidairesdumonde.org/tag/ong+ange

In the project I was supported by the architect Katherine Jarno.