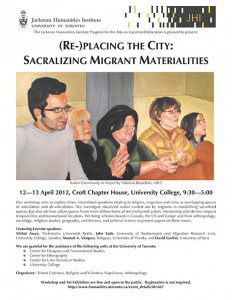 The project is a study of three different immigrant communities that live in the city of Toronto (Caribbean, Italian and Tamil). It focused on relationships between communities and the relationship of each of them with the urban public space of the city. It was run in 2011.

The project was part of a research project, lead by two anthropologists of the University of Toronto, Simon Coleman and Valentina Napolitano. It was sponsored by the Jackman Humanities Institute of Toronto and from the Centres of Ethnography and of Latin American Studies of U of T.

Simon and Valentina organized an international conference during the period of 12th and 13th April 2011, in a convention space provided by the Jackman Humanities Institute. They invited professionals from UK, USA and Canada whom work is focused on urban space, migration and religion.

I was invited to run this project jointly. I run it during 8 months and it ended up in a solo show. During the show I exhibited 10 paintings and 2 sound installations.

The subject of the exhibition was the same as that of the conference, but the anthropological and the artistic approach in this case merged together.

I was assisted during the all project by Mac Graham, a  PHD student in anthropology at the University of Toronto, who had previous experience working with religious migrant communities in Toronto.

Sponsored by U of T    and Jackman Humanities Institute

The paintings represented each communities, their way to interact with the religion, the priest of their community and the way they were living in the public space of the city.

The two sound installations were representing sounds and voices of each communities.

I worked on the stories of several believers of each group and the way they got close to the religion and the religious community.

The all project was a representation of how migrants, even if coming from different countries and even though they moved to Canada in different periods had a lot of points in common, due to their status of migrants.