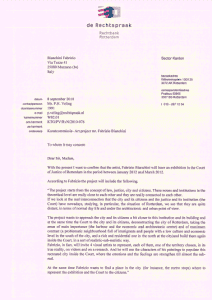 The Court of Justice is the heart of the judiciary of the nation, and it is constituted by all the figures (for instance, lawyers and judges) in charge to regulate the execution of the laws and the functioning of the justice, in order to maintain a state of justice in the city.
In the modern society, each city has its own Court of Justice.
Nowadays, the people has an image of the Court, in general which is normally associated with concepts like conflict, guiltiness, judgement, rules and duties.
This creates in the citizens a tendency to feel frightened of this institution, and, as consequence, the wish to avoid any contact with it and its building.

The court of Rotterdam (De Rechtbank Rotterdam) has been located, at the head of the south part of the city, right in front the famous Erasmus bridge. It is a former port area and it is quite new, full of strong contrasts and in full development.
The City Council has being in project to realize there a second town heart, with thousands of houses and many urban supplies.
However, this location is quite strange because it collocates an institution so important for the city life at the edge of the city center, separated from it by a natural barrier, the Maas river that ideally divides the city in two parts, the rich and proper part, the North, from the South, the poor and added one.
The court counts with two splendid and modern buildings connected by means of glass course. Nevertheless the building and its interiors don’t escape from the austere and serious atmosphere that the institution owns.

The Rechtbank organizes every year four art exhibitions of paintings in the 4t floors atriums of the building, to fill their white and harsh walls.
At the beginning of 2012 I collaborated with Mirta de Mare of Mirta de Mare Gallery (Rotterdam) preparing the art exhibition inside the Court of Justice.

First of all, using art as general medium, we wanted to approach the citizens to the place of the Court of Justice, to show this entity in a different way from the main features that characterizes it, and to bring the city and the citizens with their emotions and complexity inside the Court.
Secondly, we wanted to underline the concept of humanity, feeling and emotion in the city and in the Court, starting from the concept that nowadays people are always more hedonist, individualistic and consequently they are loosing step by step their humanity. They need to recuperate this missing part that it makes them getting far from people, things, and also institutions, around them.

In order to get it we used:
A) The entire building of the Court to exhibit a selection of my works related to the Rotterdam citizens and the city of Rotterdam.
B) Different public spaces in different parts of the city, to give a short explanation of the project and organizing debates.

The project was sponsored by Asociación Jupiterfab.